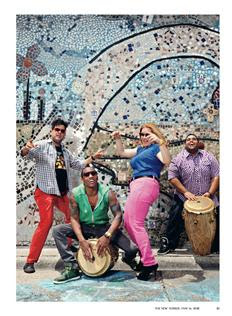 
With his high cheekbones and dazzling smile, Martinez has the charisma of a mainstream star, which he is to many in the Cuban-American musical community. He is a devotee of Santeria, the Yoruba-based religion that slave traders brought form Nigeria to Cuba in the eighteenth and nineteenth centuries, and regularly plays at ceremonies in homes in the Bronx and Brooklyn. In addition, he plays at the Cuban restaurant Guantanamera, on Eighth Avenue. He sees both venues as instrumental in spreading his powerful blend of African and Cuban traditions. Martinez grew up in central Havana, but left Cuba in 1998 and has lived and played in the U.S. ever since. The rhythm that is central to Martinez’s music, called the clave, is the beat that underlies much Afro-Cuban music. He and his remarkable quartet plan to record soon, but right now the best example of Martinez’s singing and drumming can be found on “Today’s Opinion,” a recent album by the saxophonist Yosvany Terry. The best way to experience Martinez is live. His piano player is Ariacne Trujillo, a woman who often chats during songs with Alvaro Benavides, the bassist. Martinez sits center stage, and to his right is Jhair Sala, who plays the cowbell and the bongos. Martinez and his band have won over dozens of people the writer has taken to see him, despite common confessions to not liking jazz or not understanding Latin music. If anyone can move Afro-Cuban music into greater visibility, it’s Martinez.